Australian Amalgamated Terminals (AAT) has been in operation since 2005. Presently, AAT operates terminals in all major Australian ports across the eastern seaboard.

One of its key hubs is Port Kembla in New South Wales less than 100 kilometres south of Sydney. Port Kembla is an international trade gateway for bulk in the agricultural, construction and mining industries. Furthermore, Port Kembla is New South Wales’ largest motor vehicle import hub and home to the state’s largest grain export terminal, as well as the second largest coal export port.

In addition, Australian Amalgamated Terminals provides services to the stevedores that discharge the vessels.

Port Kembla relied on the use of traditional harbour cranes until quite recently when AAT management started thinking about making an upgrade. The key issue was productivity: what could AAT do to work more efficiently and boost the overall performance of the port?

The answer: the purchase of two Kalmar Super Gloria reachstackers to add muscle to the operations and Kalmar Insight to add some ’brain power’.

Wissell explains that the Super Glorias were purchased to supplement the existing mobile cranes. He acknowledges that traditionally mobile harbour cranes have been “the crane of choice” at ports, but the Super Glorias are much faster to mobilise.

“Super Glorias are also very useful when we’re doing dual lifts, but the beauty is their mobilisation speed and ability to move from lift to lift,” he stresses.

Heavy lifters with a soft touch

The Kalmar Super Gloria Reachstacker is known in the industry as a real heavy lifter, handling loads of up to 130 tonnes when working solo – or over 200 tonnes when working in tandem with another Super Gloria. The robust Reachstacker is a decidedly versatile workhorse for port operations, specialising in the movement of all types of heavy cargo that need to be handled quickly, efficiently and with great care.

“It’s able to do the job quite well and easily. Also, the reachstacker is actually quite fun to drive,” he says.

“For anybody considering lifts of up to 130 tonnes, using a reach or hook equipped reachstacker, the Super Gloria is an ideal choice.”

According to Brengovitz, the Kalmar newcomer outperforms the crane that AAT used previously for most of its crane lifts. “We are able to do a lot more lifts in places that the crane wouldn’t be able to do. Therefore, it is making our job a little bit easier.”

Wissell is very pleased with the performance of the Kalmar Reachstackers – and he knows what type of operations benefit the most from this equipment.

“For anybody considering lifts of up to 130 tonnes, using a reach or hook equipped reachstacker, the Super Gloria is an ideal choice.”

“We use Insight to look at the hours when machines are deployed, the work performed and the weights that are lifted, as well as various service schedules – among other things,” he sums up. 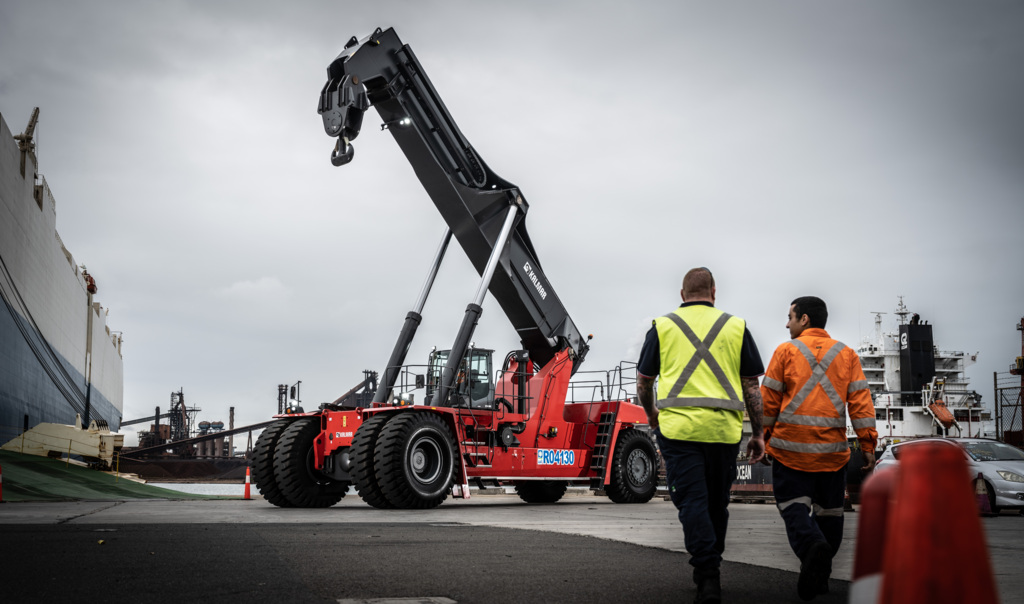 Themes in this article

Starting in March 2022, all Kalmar Insight users can enjoy a new and improved Kalmar Insight experience. Reporting, personalisation, sustainability and user-friendliness have been improved significantly with the launch of the new version. &nbsp;
Services Technology

Kalmar is making its first-ever delivery of a Kalmar Gloria reachstacker for barge handling operations in Vietnam. Kalmar&rsquo;s Vietnam dealer, Unico, has sold a Kalmar Barge Handling Reachstacker to SSIT Terminals. The Reachstacker is expected to arrive at the port this year.
Collaboration

Kalmar is shifting to electric powered service vans on a global scale. The move is an important milestone in achieving the company&rsquo;s goals of sustainability and zero emissions.
Eco efficiency Services